Yay! Sci-fi! It’s been a while since I’ve seen a proper sci-fi movie.

But on the other hand, this is Roland Emmerich, so it’s gonna suck. But I’m fine with that.

It was so much work watching this movie. It’s a 4K movie using Dolby Vision, which my mpv didn’t support. But! The mpv people have written support for the format over the last few months in the form of a new library called libplacebo. But getting that to compile required upgrading my OS… a lot… which then broke some of my obscure peripherals (like the DisplayLink monitor that I use to display some info).

But! It was probably the least breakey ~5 year upgrade I’ve ever done? It’s surely the Year Of Linux On The Media PC now.

I kinda liked the first scene here, but then this movie takes a nose dive in interest?

There’s nothing really bad about these scenes… sure, they’re a bit boring, but not massively so?

It’s kinda by the numbers? But I’m not annoyed.

Emmerich gets more out of CGI artists than most directors these days. It actually looks kinda scary and pretty and awesome.

But I can see why everybody hates this movie: The mood is a bit… down? This isn’t quite what people need this week? 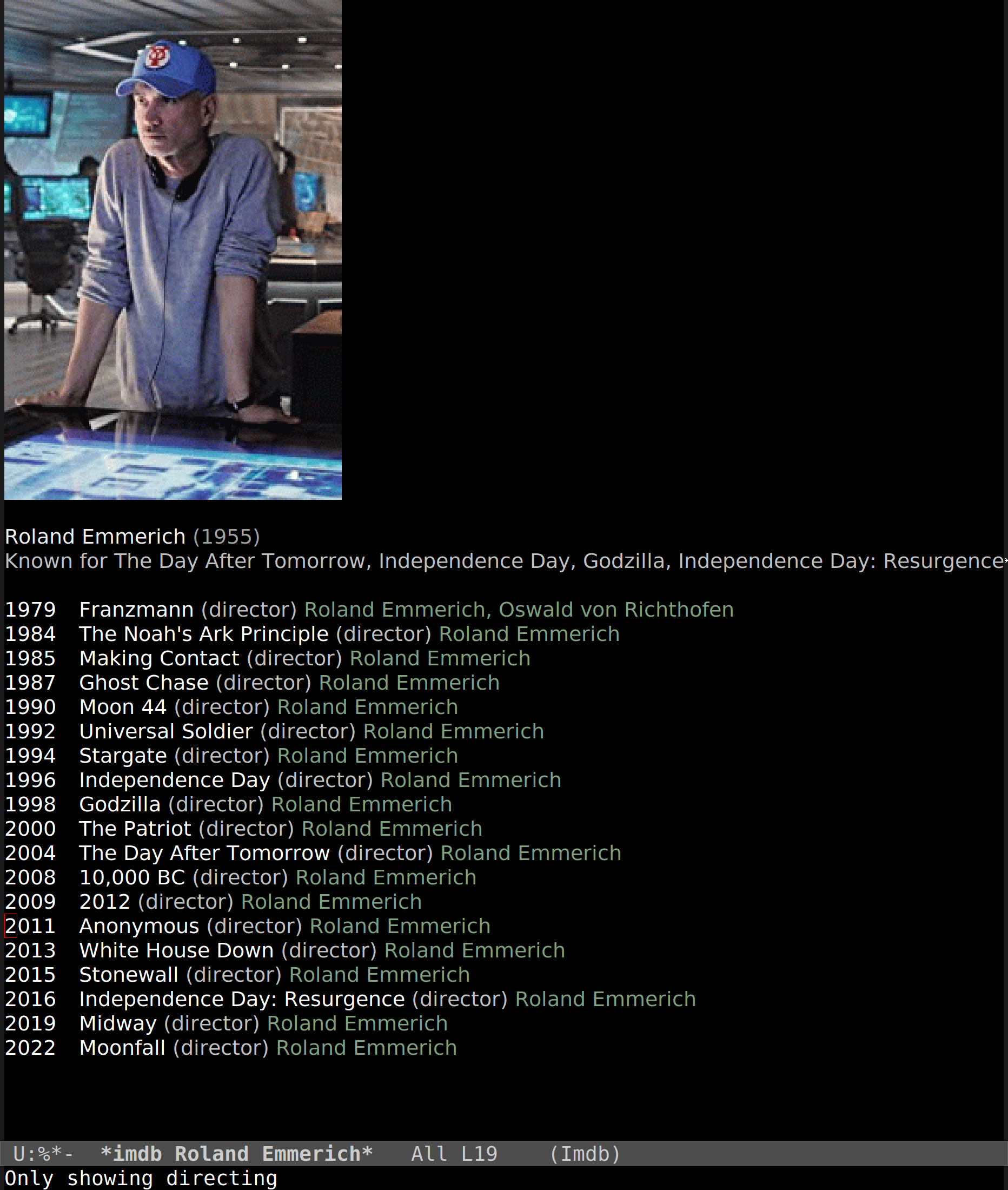 Oh, Emmerich has done a whole lot fewer movies than I thought he had. I’ve only seen a handful? Less than a handful. I was thinking this was Michael Bay.

It’s been like an hour of… nothing? I mean, character building. Nobody has actually used the phrase “you’re not my father! you weren’t there when I grew up!” but you can see that the characters are thinking about saying it.

Hopefully something will happen in the second hour.

But people love this sort of stuff! I’m not quite sure why people hate it in this movie…

This is a really cheesy movie. In a good way.

But I guess it has some issues with tone and pacing. If it had been zanier, it’d be easier to read, but it started off like it was, like, A Serious Sci Fi Movie. But it’s not really — it’s nice and goofy.

It’s the Moon! Run away!

Oh, now I get what this movie reminds me of! It’s totally like one of those 50s sci-fi movies where they have to send out a team of scrappy people into space to tackle some threat. But updated with better graphics.

This is totally MST3K fodder. In a good way.

Yee haw! They did that scene! Classic.

I had so low expectations of this movie, but I really should have guessed that the amount of stick this movie was getting had to mean that it’s a quite nice movie. And it is. It’s a quite nice, goofy movie.

Now, this isn’t a perfect movie. The first hour is inexplicably flabby. There’s about 90 minutes of material here, but padded out. So:

And it’s… the worst. I mean, I like Red Letter Media, but this one just the most boring ever. Moonfall is 10x more entertaining than that episode, because they basically just retells the plot (as if that’s interesting?) and then complains that the plot isn’t quite realistic in some bits?

It’s so weird and lazy.