So… Uhm… I’m not quite sure what happened in the previous movie? Uhm… did Luke die? Yes, I think Luke died? SPOILERS! And that guy from that marriage movie thing … went… evil? Or did he renounce evil? Is he nice now?

And that woman! Rey? She… she’s like a god now? I may be misremembering some details. I’m amazed that I remember anything at all! Let’s see.

Seeing Carrie Fisher … reanimated this way is really distressing. I’m guessing they took footage of her unused in the previous movie and dropped her in here? She’s doing lines that you can see how they wrote the surrounding lines around, to make they sound like something else than random samples dropped into the movie, and… it doesn’t work at all. She’s spouting non-sequiturs while connecting to nothing around herself, and it just seems cruel. Abusive.

Wow. This is all kinds of stupid — it doesn’t make sense even on a scene to scene basis — but it’s kinda fun? That is, there’s some really fun scenes in here, and then there’s some really dreary scenes, and the pacing is really weird, and I can’t believe that we’re 40 minutes in and… nothing has really happened yet, really? I mean, it has, but it feels like we’re still in the intro, and the adventure is gonna start any moment now…

But I’m enjoying myself; this is kinda fun.

At one point in this movie, I was definitely going to ⚂ this movie. Because this thing, which I’ve seen on 9gag for seemingly years now, is true: 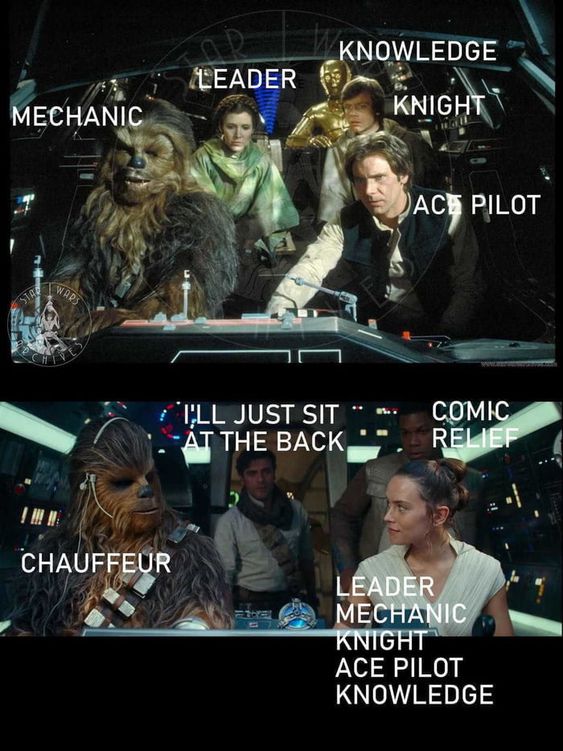 Basically, everything anybody else does in this movie doesn’t make much of a difference: They’re just landscape for Rey’s hero story.

On the other hand: I laughed (once), I cried (several times), and looks great. So who cares if the plot really… er… doesn’t really fit together very well? Sure, it’s too long, but there isn’t really a bunch of scenes that you could see being cut — there’s usually half an hour of padding in these movies, and that’s not the case here — instead there’s just half an hour of really boring scenes instead.

So: This was a really enjoyable movie to watch. Perhaps there’d be all these things to delight or enrage me if I were a Trekkie, but I don’t really … remember … any of the background to this movie, so I’m pretty much uninvested.