This was made by John Singleton? The Boyz n the Hood guy? Hm.

Well, OK, the colours really pop. Not everything colour-graded to teal, but instead a riot of colours, and I really like that.

So the bleached blond(e) guy is here, but otherwise there’s no connection to the first movie? I mean… there’s cars and stuff. I guess that’s a connection.

I did like that street race, but it was, like… much more of a fantasy than in the first movie. The cars rear-ending each other and stuff? Nah. What I liked about the first movie was that it was pretty nerdy. This is more like er what’s the word oh yeah stupid.

I was so surprised by the first movie: It had a complex plot (sort of) and a bunch of interesting characters, and this… they took the blond(e) guy from the first movie and then… nothing else? It seemed like they were doing a whole little micro universe in that movie that could have been expanded, but instead this is just a lame … sting thing?

OK, I’m disappointed, but now I’m resetting: This isn’t The Fast and the Furious, but perhaps it can be stupid fun anyway? 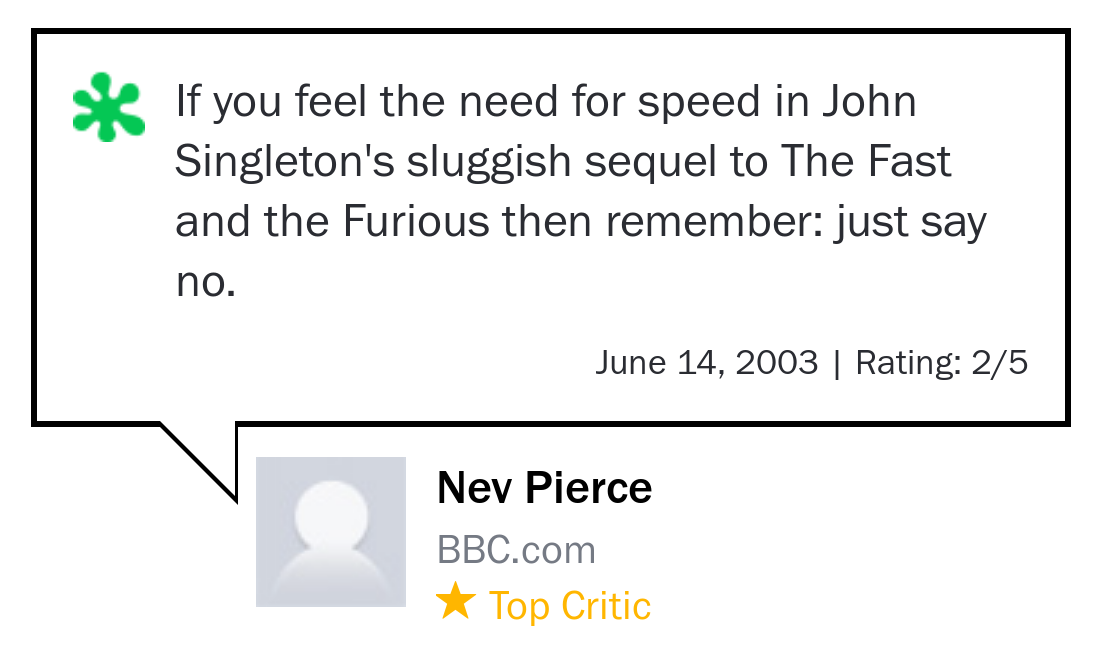 I can’t get over how boring this movie manages to make street car racing seem. And the rest… it’s beyond tedium: It’s all the worst of the worst “man talk”. You couldn’t parody this because it’s just all there already.

This is just a horrible, horrible movie. I’m so disappointed. I wanted a fun, easy-to-watch movie, and instead it’s just sheer torture.

Did Singleton even watch the first movie before making this one? It’s like somebody told him “It’s a about street racing… and there’s a cop…” and the took it from there, just imagining how bad that has to be from that recap.

How did the franchise bounce back from this?

I assumed that this was a lower-budget sequel to cash in, but the budget was almost twice as big. It’s… OK, I guess the sheer number of cars was expensive, so they put the budget on the screen, but they didn’t use any money on, like… anything else?

I do like the colours. The colours pop. Other than that, there’s nothing here.