OK, here we are again… the first movie was a snooze fest with two fun scenes. Perhaps this one will be better?

The scenes play out like if I’m supposed to recognise the actors and feel some thrill by seeing them on the screen, like that scene between the guy in the hat and his boss in the titty bar office. I don’t, and I don’t.

And perhaps they don’t? Faux referentialism?

THIS IS SO BORING. 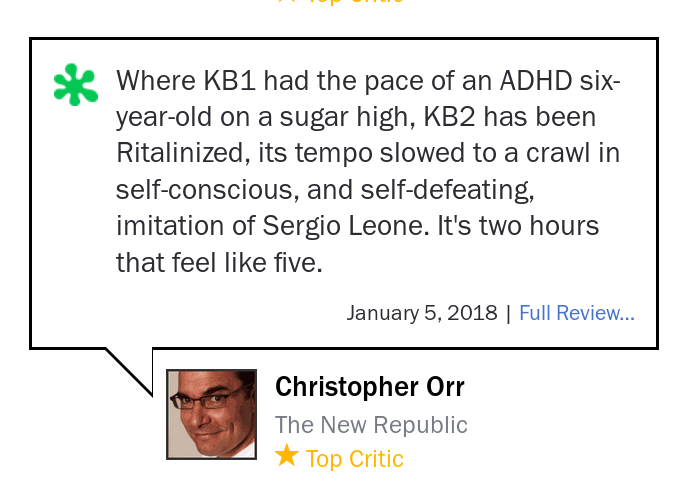 If Kill Bill vol. 1 is what it’s like to be a six-year-old with ADHD, those guys are a lot more chill than I thought. The first movie was a slog — 90 minutes of character development, origin stories and recaps, and 30 minutes of fun action.

This has lasted 40 minutes, and it’s been about two minutes of action and 38 minutes of backstory and tedium. 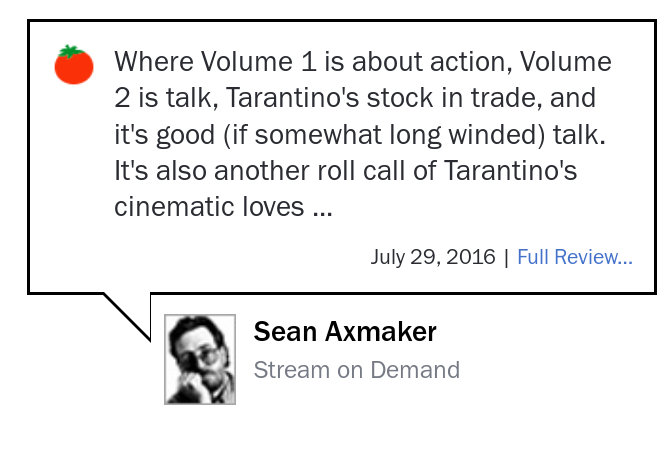 BUT IT WASN”T ABOUT ACTION!

It’s like these reviewers have never seen an actual action movie in their entire lives.

Yay! When she meets the Chinese guy, the film turns into total sitcom, and that’s a lot easier to take. It’s not extremely funny sitcom, but it’s amusing.

And then the comedy goes even broader when Daryl Hannah finally makes her reappearance. Her scenes were actually funny!

I guess it just goes to show that you can never have too much Daryl Hannah in your movies.

And now we’re into mommy issues. AND THERE”S STILL AN HOUR LEFT!

What’s even supposed to be the tension here now? It’s just about getting Bill out of sight of her daughter so that she can kill him? I hope so, but it’s just so… flat…

I didn’t know it was possible to even be this bored as I am now listening to Bill talking about Superman.

But I did like the epic battle with Bill. Made me laugh, at least.

I guess the second film is better than the first — it’s got funnier skits. But it’s got even longer stretches of sheer boredom. So I guess it’s about equally bad as the first one on the whole…